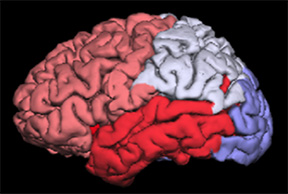 The brain, one of the largest and most complex organs in the human body, is about the size of a grapefruit. Yet it contains more than 100 billion nerves and numerous folds and creases. It is the “folds” of the brain, called gyri and sulci, that were the focus of a University of Notre Dame-led study recently published in Physical Review Letters.

Gyri, the bumps on the surface of the brain, and sulci, the groves in the brain, create the folds of the brain. They perform two important functions: expanding the surface area of the cerebral cortex, which increases the brain’s ability to process information, and creating the boundaries between the lobes of the brain.

According to Maria Holland, the Clare Boothe Luce Assistant Professor of Aerospace and Mechanical Engineering and director of the Computational Mechanics of Morphology at Notre Dame lab, the team studied the role of physics in gyrification, the folding process that the brain undergoes during development. More specifically, they examined the geometric and physical factors that impact cortical thickness patterns. The information they found could begin to provide answers to fundamental questions about how an organ knows when and where to grow, as well as insights into alterations in cortical thicknesses that have been associated with neurodevelopmental disorders such as lissencephaly and polymicrogyria, autism spectrum disorders and schizophrenia.

Holland and team members — Silvia Budday in the Department of Mechanical Engineering at Friedrich Alexander University of Erlangen-Nurnberg, Alain Goriely in the Mathematical Institute at the University of Oxford and Ellen Kuhl in the Mechanical Engineering Department at Stanford — were able to confirm through their study that brain development is not exclusively the result of genetic patterns. They showed that it also follows physics-based laws by demonstrating that geometric and physical factors alone could lead to these cortical thickness patterns. Through an analysis of more than 500 human brain scans, the team also found that gyri in the brain are typically thicker than sulci, and that this asymmetry is a universal phenomenon with implications in physical, engineering and biological systems.

This work was supported by the National Science Foundation (NSF), the Engineering and Physical Sciences Council, an NSF Graduate Research Fellowship and the Stanford Graduate and DARE Fellowships. It is being continued in conjunction with Advanced Diagnostics & Therapeutics at Notre Dame. For more information, visit https://ame.nd.edu/research/faculty-research-labs/command.

Originally published by Nina Welding at conductorshare.nd.edu on December 10, 2018.